How Much Do I Need To Retire? Dave Ramsey Answers … But Be Careful! 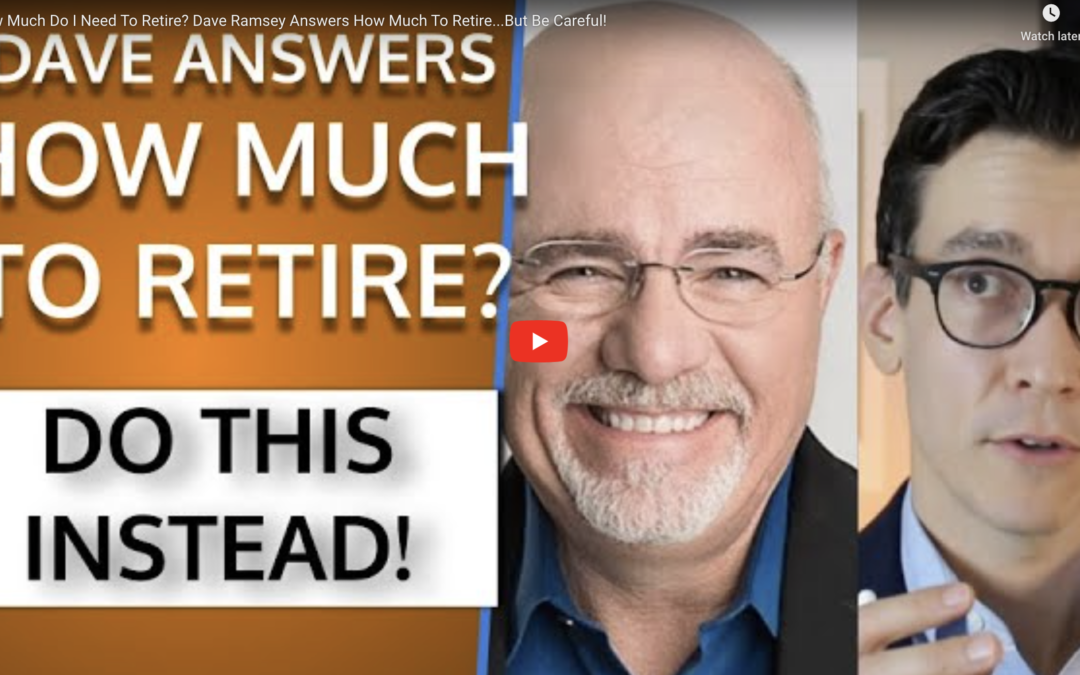 How much do I need to retire? is a common question that I hear, and it’s a really important one.

Recently, I was reading a blog from popular financial person Dave Ramsey, and he was weighing in on the subject of retirement. I think Dave helps so many people when it comes to debt elimination and figuring out the baby steps in saving. He does great work there, but when it comes to retirement planning, in my opinion, you might want to think twice about implementing some of the advice that he gives. I’m going to go over it with you today and why you might want to be careful and what you can do instead to put yourself in a better position.

First of all, realistically, you don’t want to implement anybody’s advice without meeting with them and considering your specific situation. I would much prefer doing that versus listening to someone on YouTube, or somewhere else, on what you should be doing with your money. So, talk to someone that you trust.

Anyway, as I was looking at Dave’s blog and what he thought about this, he says that if you’re able to live on 8% of your nest egg, and if your mutual funds can do 12%, you’ll have 4% to cover inflation. Okay; that makes sense – if you want to live on 40K, he says, you need $500,000 in the bank. So, take your total nest egg and divide it by 0.08 to get that number you’ll need to live on each month.

This is, in my opinion, a little bit risky. And here’s why:

The Sequence of Return Risk

Applying this to our example: if you’ve got 500K and you’re taking out 40K, an 8% withdrawal, and you’re averaging 12% somehow, but let’s say it’s 2007 and then the financial crisis happens. What if the investments, because you’re invested aggressively, get cut in half but you still need 40K to live? Now you’re taking out 16% and that could really crash a plan, so that’s something to be careful about.

Regarding this idea of the 12% rate of return on mutual funds, if you’re achieving that sort of return, my thought is that you’d have to be invested pretty aggressively. Many people who are in retirement don’t feel comfortable taking that sort of risk and going along with the rollercoaster that comes with investing in equities – especially looking at 2020 and what happened in March – because there’s fluctuations that happen.

People in retirement don’t always want to do that, so a lot of times we’ll bring up the three-bucket strategy as a possible retirement withdrawal strategy.

Let’s look at an example of a 500K nest egg to start that first year in 2020. And in this scenario, achieving a 12% return and taking out 8%, that plan looks successful and you’re actually growing your assets in retirement; fantastic.

But what if you were off by 5K of expenses; what if you really needed 45K per year instead of 40? That’s a big difference that drastically impacts your plan. And what if you were right: you needed 40K a year. But what if instead of 12% you only got 10%, how does that impact the plan? Those are just a couple of reasons why you might want to be careful when planning and make sure that you talk with a professional to map it out and think of all the different scenarios.

And if this isn’t the best way, then what is a good way to go?

But again, this is still basic. The 4% withdrawal rate isn’t bulletproof, it’s an opinion, it’s a financial withdrawal strategy out there. I recommend meeting with someone and specifically looking over your scenarios, just yours and not anybody else’s. A lot really depends on the money that you have invested and the withdrawal rate that you’re using.

As advisors, we’ve helped hundreds of people plan retirement, and we know that the more specific you can get in your plan, the more peace of mind you’ll have in retirement. If you’re interested in more peace of mind, reach out to me and I can help create your streamlined retirement blueprint, or I can give you The Perfect Retirement Plan that can help walk you through steps to take for your own retirement plan.