Trump v Biden 2020 Election: How Will It Impact My Retirement 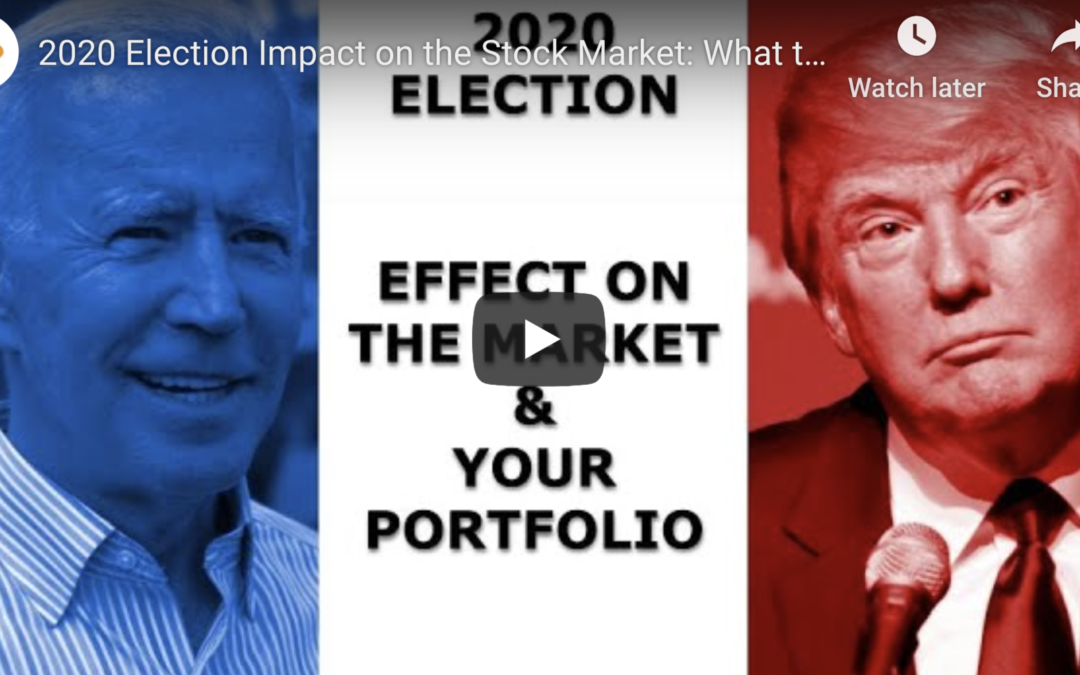 How will the 2020 election impact my retirement if Trump or Biden wins?

We’re seeing more and more news every day around the 2020 presidential election, what this means for the economy, and what it means for our investments. And I’m hearing more questions from clients around this topic and how it might affect their retirement and investments. I want to give you some thoughts on preparing yourself for different potential outcomes. The big question is: what’s going to happen to the markets, whether it’s Biden or whether it’s Trump. It’s common to believe that a Democratic candidate, if he’s favored to win, usually scares stocks. People think that it scares stocks more than if it’s a Republican candidate favored to win, and there’s actually a pattern of that happening in past years.

Take a look at this information from First Trust Portfolios which shows the S&P 500 Index since 1928 and what the results were if a Republican was elected (15.6% average return) and if a Democrat was elected (7.6% average return). You can see that with Republican candidates, the market reacted better in those years. But what’s interesting is that in the following year, the inaugural year, the reverse actually happens.

Next, take a look at this chart from Business Insider. The blue line shows the average from the first year with a Democratic president and the red line is with a Republican president. It’s almost like it flip-flops from the first year to the inaugural year and when you look at the averages, it all comes out to be nearly the same. So it almost doesn’t matter when you look over two years; it’s just interesting data that shows some patterns. But the big thing to remember is: don’t make decisions based on things that have happened in the past or what you think might happen, because it usually doesn’t work out.

And speaking of patterns, here’s information from Dimensional Funds showing the past nine presidents and what the results were for the S&P 500 Index. Now, do you see any patterns in the chart referenced? Well, if you’re like me, then you don’t see any because there are none. There were no patterns for who is president and what the market does, because there’s so much more that goes into the returns of the market than just who the president is. It might have an effect for some period of time, but when you look at the total, if you’re an investor and you’re investing for more than one or two years, then there’s no pattern to who’s president and what the markets do. That’s just the facts; that’s what the data has shown.

Now, some people bring up the concern, “What if it’s a one-party Congress and president, then couldn’t that be a risk because so much more can get passed during that presidency?” Here’s what it looks like when, for example, there’s a Democrat as president and also a Democratic Congress. This is also from First Trust Portfolios, showing from 1950 to 2019, but you can see there’s no pattern here either. So it doesn’t matter if it’s full Democratic Congress or if it’s full Republican, or if it’s split, whether it’s a Democrat president or a Republican. There’s no clear pattern there.

Number One is, very simply, don’t try to predict anything. Just because you have a feeling or you think that you know how it’s going to turn out, or, if you look at the patterns and think, “Okay, I’ll make decisions based on the past,” don’t try to predict it because it usually doesn’t work. Look at what happened in 2016: not many people predicted that Trump was going to win and people who did think that he would win, thought the markets were going to suffer because of the unknown. So, don’t predict anything.

Number Two is to remember that the headlines are designed to grab your attention. We’re going to see a lot more between now and election day with these headlines and they’re just looking for eyeballs so they can sell more ads. A client sent me a video from a major news source and it was talking about selling everything because so-and-so is going to get elected or reelected – I don’t even remember – but either way, it scared her. We had to talk through it and look at her plan to see that we’re prepared for any scenario.

Number Three is to focus on what you can control and create that retirement withdrawal plan for various scenarios. And if you need help doing that, go to our website, streamlineplanning.com, and sign up for a free planning session and I can go over that with you.

Number Four is to look at the big picture. As investors, we want to capture that long-term growth of the capital markets, regardless of who is president. So last thing to look at is all the different presidents and what the market or really the S&P 500 Index has done each term. And you can see that people who are long-term investors, they do get rewarded over time.

If you’ve talked to someone recently who has brought up worries or concerns about the election or market impact, share this post with them and maybe it will help them. And I’ll also be putting out more posts like this; so be sure to subscribe so that you don’t miss the next one.